LIKE MOST GOOD IDEAS, THE SETG WAS THE PRODUCT OF A FEW FRIENDS IN A PUB AND A CERTAIN AMOUNT OF SHANDY…

… but its roots stretch back to the impending withdrawal of slam door trains from the railways of Southern England in 2005. 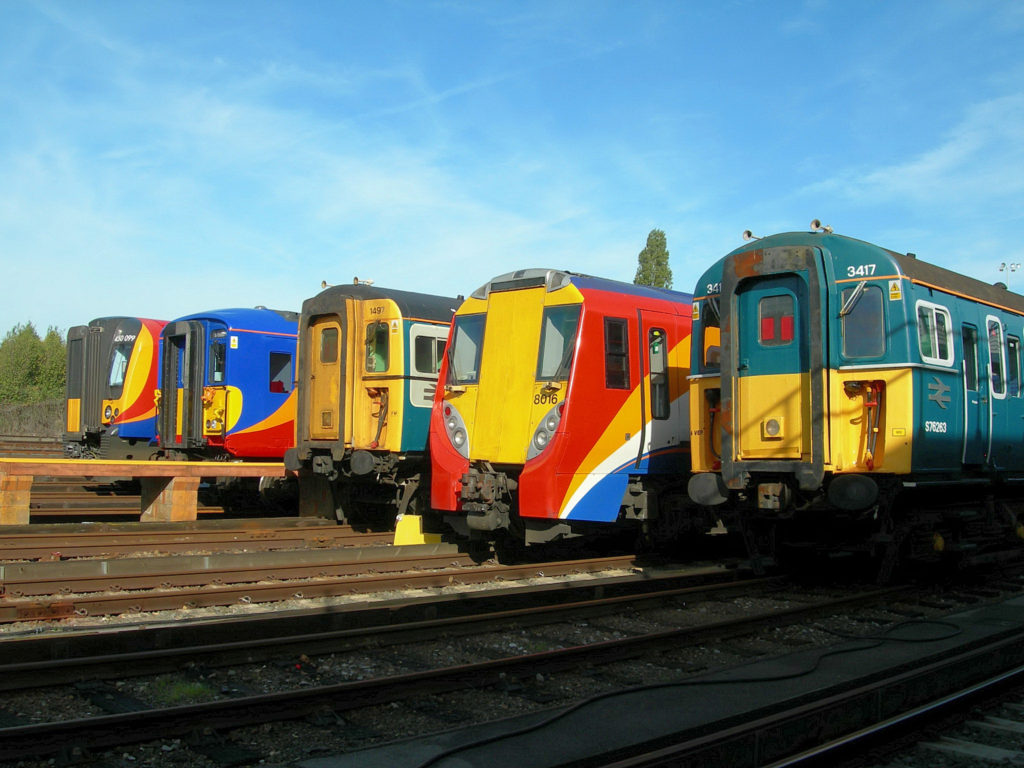 South West Trains had decided to mark the passing of these trains by repainting and refurbishing one of their 4VEP units into as near delivery condition as possible. The man tasked with overseeing this operation was Chris Buckland, based at Wimbledon Park depot in South West London. The first task was to select a unit from the fleet. With a mind to history, 4VEPs having been the first electric units to take over the London to Bournemouth route in the 1960s, Chris ideally wanted to use the first unit to be delivered: No. 3401. To quote Chris, however, 3401 was “a bit knackered”. Looking through the reams of history on each unit it soon became obvious that of the original 20 units, No. 3417 was the best candidate. It was the freshest from overhaul, it had suffered very few mechanical failures and the state of its bodywork and upholstery was acceptable. It was a good ‘un.

Once in the shed at Wimbledon Park, work began on turning the clock back to 1967. Fresh paint, a refreshed interior – everything possible was done to ensure that when the unit arrived at London Waterloo for its grand relaunch on 2nd June 2004 the unit would look fresh from the factory. Not everything went smoothly: not many people know, for example, that on that journey from Wimbledon to Waterloo there were two fitters feverishly attaching new mirrors to the walls of the toilets. The contractors who had fitted them the first time had used double-sided tape instead of screws. When the toilet doors were closed, the new (and rather expensive) mirrors fell off the wall.

Until withdrawal a year later, No. 3417 became something of a celebrity and was looked after accordingly – after withdrawal the celebrity status continued. The unit become the first push-pull slam door train to work over the Swanage branch since 1972, the last slam door train to work on the London & South Western mainline unpiloted, the first multiple unit to work south from the Bluebell Railway’s new station at East Grinstead, the only multiple unit ever to shunt the brand new steam locomotive No. 60163 “Tornado” . . . Having moved from the ownership of South West Trains to the Bluebell Railway in 2009, it quickly became clear that as the last remaining representative of its class No. 3417 would require specialised attention to ensure that it remained not only presentable but able to work.

Since the initial refurbishment work carried out in 2004, No. 3417 has been looked after by a core of staff at Wimbledon Park depot co-ordinated by Chris Buckland. After retirement from front line service, Chris and a small band of fitters and drivers from Wimbledon Park continued to ensure that the VEP was kept in good condition. This small group of enthusiastic railwaymen, now supplemented by generous support from individuals outside the railway industry, are now the backbone of the Southern Electric Traction Group. We are working to ensure that the Bluebell Railway’s most modern item of rolling stock is well looked after!

From technical support to donations of hard cash, the support of well wishers is vital to ensure that No. 3417 has a long and successful retirement. The SETG & Bluebell Railway both firmly believe that No. 3417 deserves a long and colourful life away from the mainline, and to make a triumphant return to the mainline; your support will make that ambition achievable.