Good evening everyone.
I’m writing this report from my office, early on Sunday evening. I’m telling you that because several things haven’t changed since yesterday; the first thing being that I am very proud of what was achieved at Strawberry Hill only 24 hours ago. Yesterday felt like a huge leap forward for the unit and for the SETG (I’ll elaborate as we go along). Secondly, I’m still knackered; this preservation stuff isn’t simple, but then again anything worthwhile is rarely easy. How lucky are we to not only have a dedicated and talented team backing the unit, but to have so many of you following our progress on Twitter and Facebook. It’s astonishing. None of us are doing this to look cool (after all we’re railway enthusiasts and as far as we’re concerned “Cool” is merely a comment on the ambient temperature), so to see so massive a reaction to our Facebook posts and Tweets is hugely gratifying. We enjoy keeping you in touch with things as they happen as it’s the next best thing to actually having you all there and helping, and we’re glad of your company and encouragement on this mad journey.

On behalf of us all, sincerely, thank you. 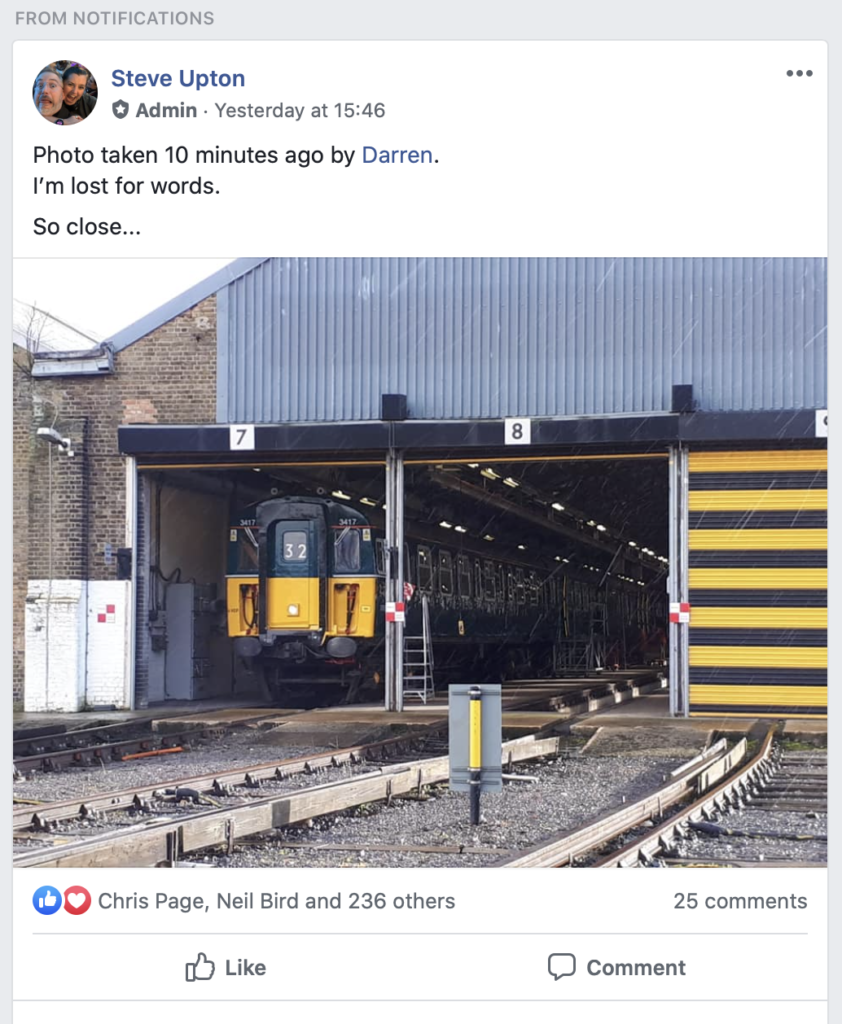 So then, on to the work report:
Our efforts yesterday were primarily focussed on the Long Trailer, No.70797. The past few weeks has seen the coach gradually brought back to life with lights, seating, window trims and quarter pads refitted. Slowly but surely the coach has gone from looking in dire need of attention to almost being fit for traffic. However there have been two major problems before we can that the interior of the vehicle is ready for passengers. Firstly there has been a lingering fault that has prevented the saloon heaters from working. Secondly we have the long-term problem of not having enough seat bases (seat cushions to those outside the railway) to fit out the coach. Those that are fit for use have already been fitted, and so we are now stuck with how to revive the cushions water-damaged during the unit’s periods of uncovered storage at East Grinstead and Clapham. Fortunately for both problems, we had just the right Minions to hand.

Availability of seat bases is a massive concern for us in the long term, Despite the kind donations of trim by our Friends at the Brighton Belle project, we will still have to fall back on restoring most of the water-damaged trim that was removed from the unit on arrival at Strawberry Hill in late 2015. Since the amount of damage varies from seat to seat, depend on its former location within the unit, some bases can be recovered whilst others will have to be partially or fully rebuilt. Fortunately we have a good relationship with Hants & Dorset Trim in Eastleigh, but of course that work will not come cheap! In the meantime we are concentrating on what work we can get done ‘in-house’ in an attempt to further the restoration before we have to start paying for work to be carried out by contractors. Saturday saw our first attempt to recover one of the partially damaged seats. 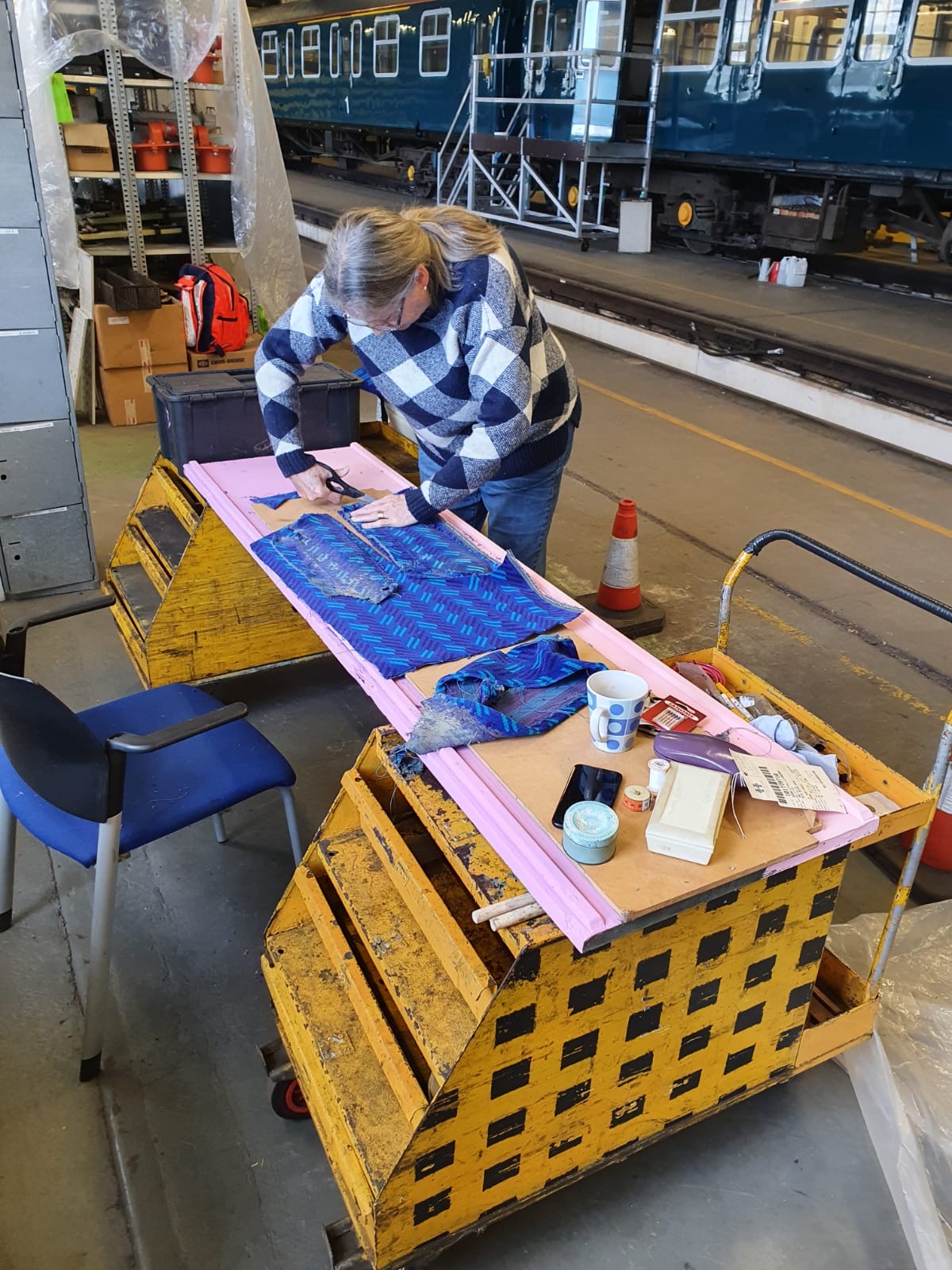 The picture above shows Maggie, our seamstress, removing the old side panels from a damaged seat cover. The seat covers are comprised of one top sheet that covers the top of the seat (the name is in the clue, folks!) and two side panels which are stitched into either side. The cover is then secured with industrial staples to the seat base. Maggie and Lynn dismantled one of the the “Best/Worst” covers to make up patterns for the new cover, and used viable scrap material from the damaged seat to make up new end covers. The top material came from the first of the rolls of moquette which we purchased two years ago from the North Norfolk Railway. By reclaiming material where we can from damaged covers, we hope to ensure that this supply of moquette can be made to last – especially since having more produced will require significant funds. 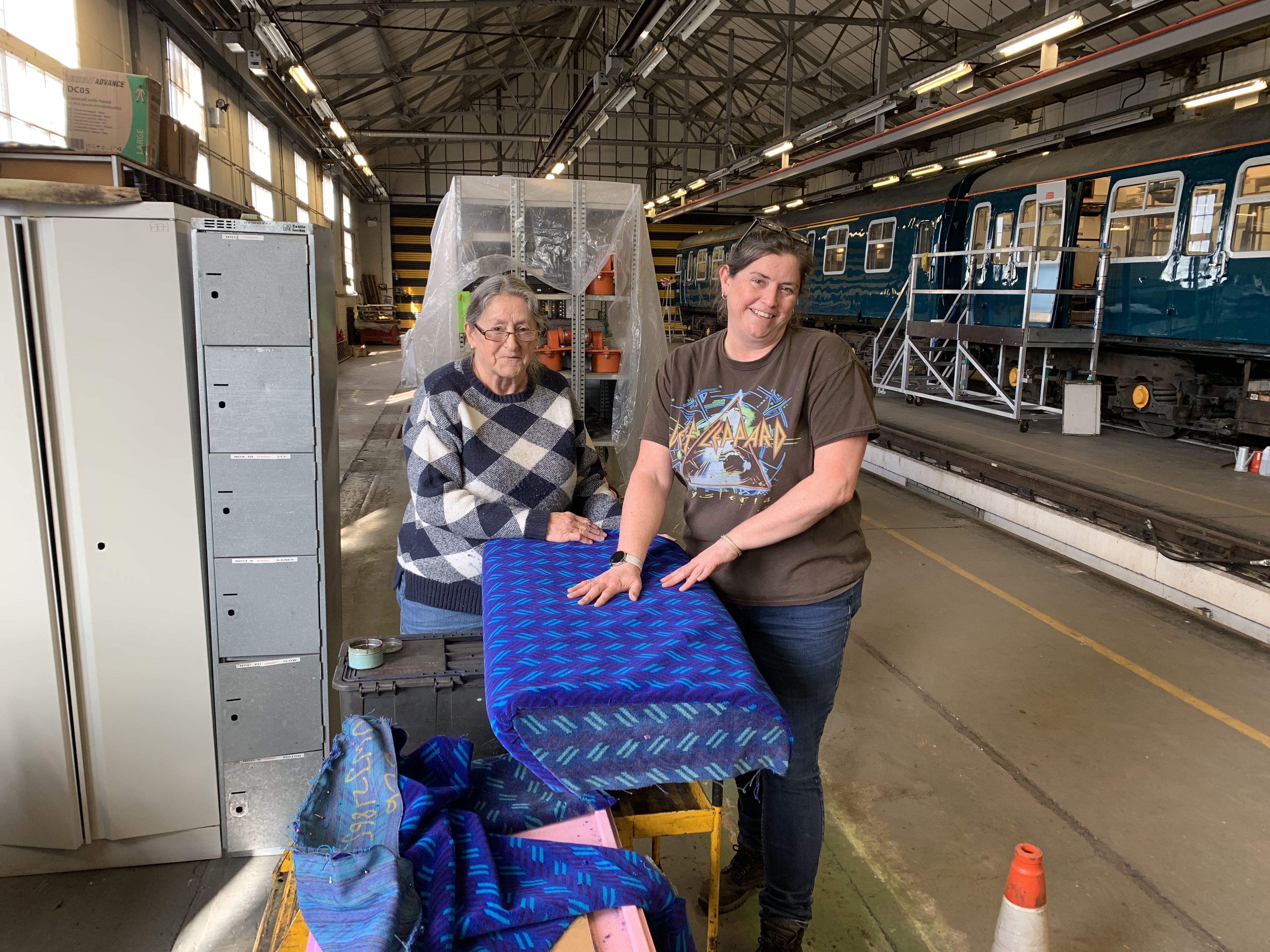 After some trial and error Maggie and Lynn finally produced the first seat cover. The picture above shows them with the first recovered seat; note the recycled side panel. Inspection by the rest of the Minions was carried out and we all confessed ourselves hugely impressed – the skills needed were far beyond that possessed by the fitters and drivers in the team! The last job was to test fit the seat into 70797. I think the picture below speaks for itself – it’s a job worthy of the Trim Shops at Eastleigh or Selhurst! Over the coming months we hope to produce more of these two-seat bases, and the larger 3-seat bases as well to a similar process and quality of finish. There will still be seats that are beyond our current ability to restore, but we can at least shrink the amount of work (and money) needed to rehabilitate the passenger accommodation. 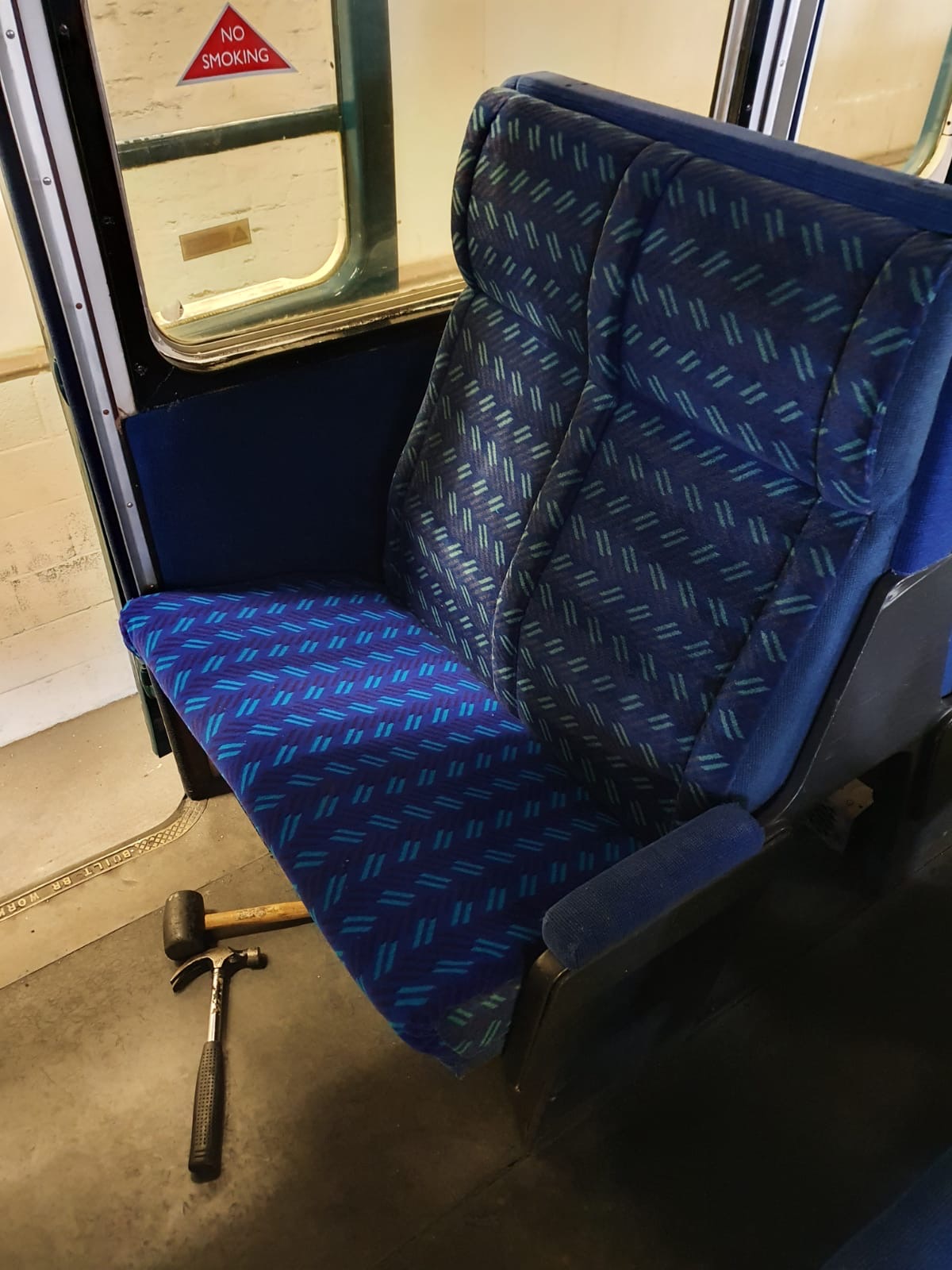 Heating Fault on 70797: Fault Finding and The Cure:

As was mentioned earlier, No.70797 has a long standing fault with failed saloon heating. Whilst this isn’t a massive problem while the unit is undercover, should the unit need to be moved outside for any period we are concerned that a cold coach would quickly build up condensation and mould problems similar to those found when the unit was in open storage at Clapham and East Grinstead. Of course this becomes even more of a concern when you consider that we have recently refitted approximately 70% of the seats into the coach, so remedying this has become a priority. Senior Minion Buckie, also the most experienced fitter on our team, spent some hours on Saturday morning insulation resistance testing the coach heat wiring to find where the earthed site was. This involved disconnecting various heater elements and splitting circuits down to isolate the offending faulty wire. Eventually this was traced to the heater conduit which had rusted through, allowed water to penetrate the wiring bundle and compromise the insulation around the wire cores. Any electricity being passed through the wiring was earthing through the rusted metal and tripping the system out*. Buckie has assessed the damage, and repairs will need approximately 3 meters of new conduit, shaped to fit accordingly, and fresh wiring to replace the damaged originals. Were the unit still in service, and if we had access to a fully staffed depot with all the correct materials, Buckie estimates that this would be approximately a week’s work – as it is this may take some months to correct. However, it is by no means an unknown fault for 4VEPs and well within our skills to correct.

(*Buckie – did I explain this correctly? I’m only a driver… Potter)

See here for more news regarding the extent of the electrical fault with 70797. 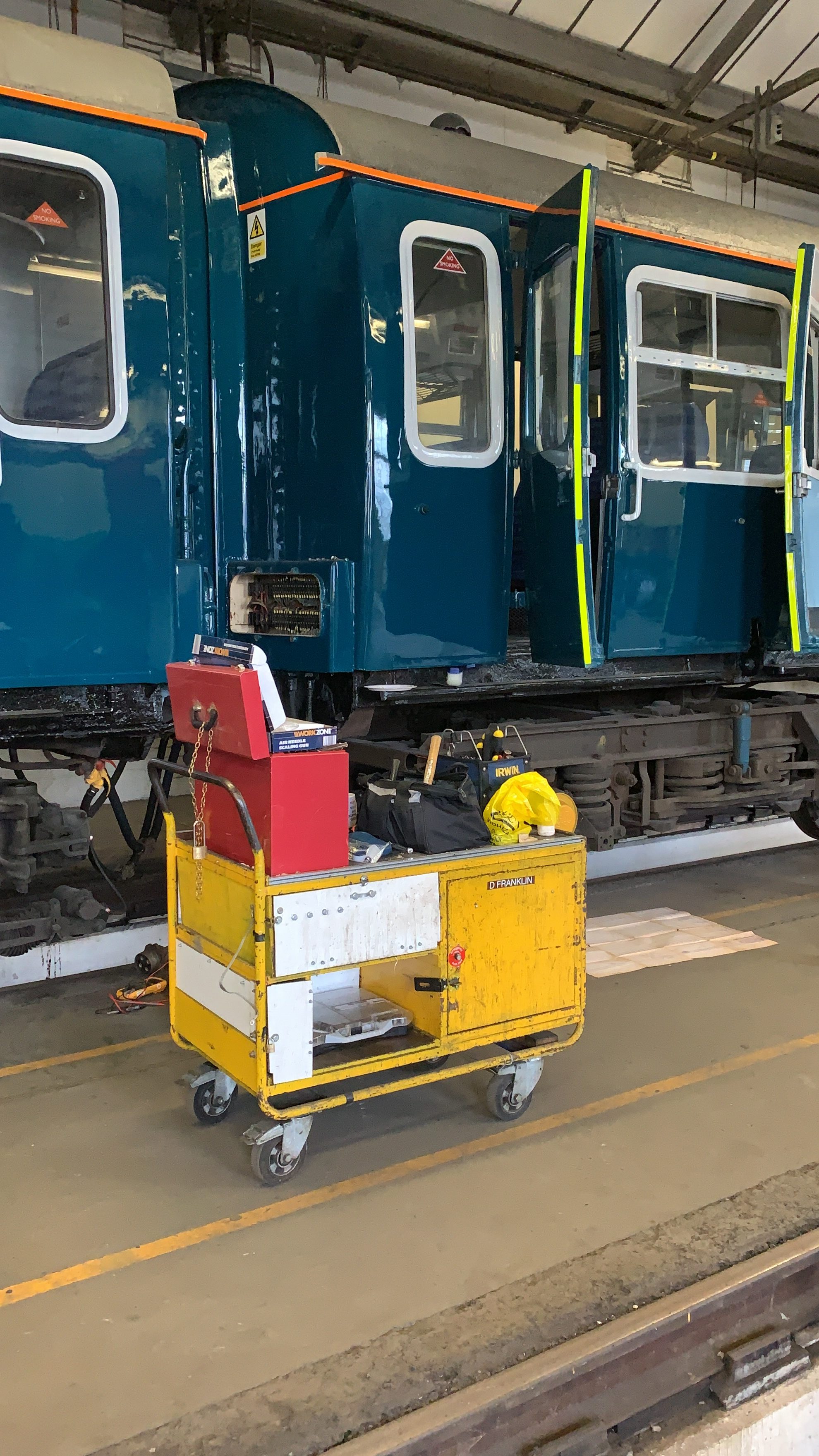 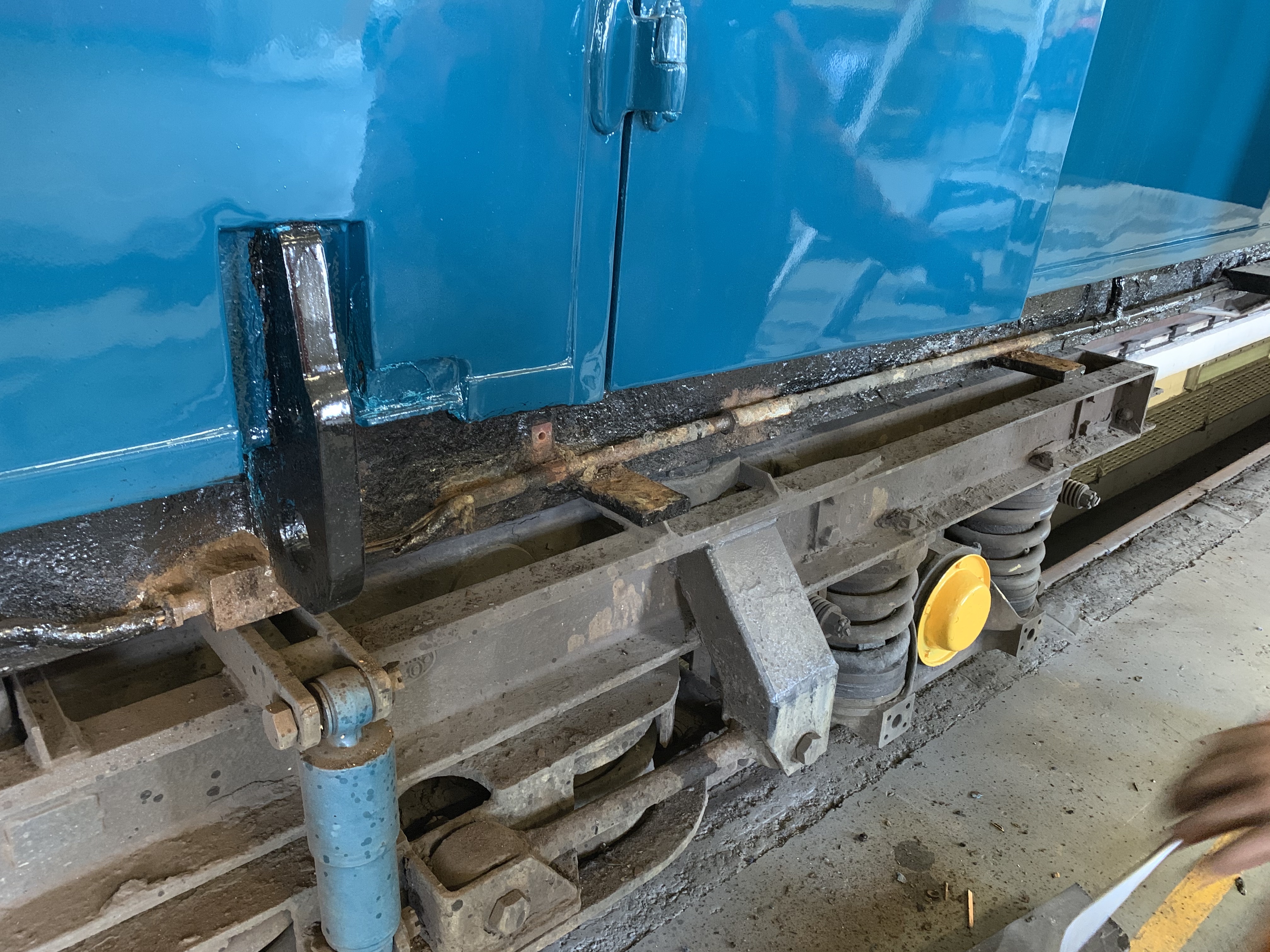 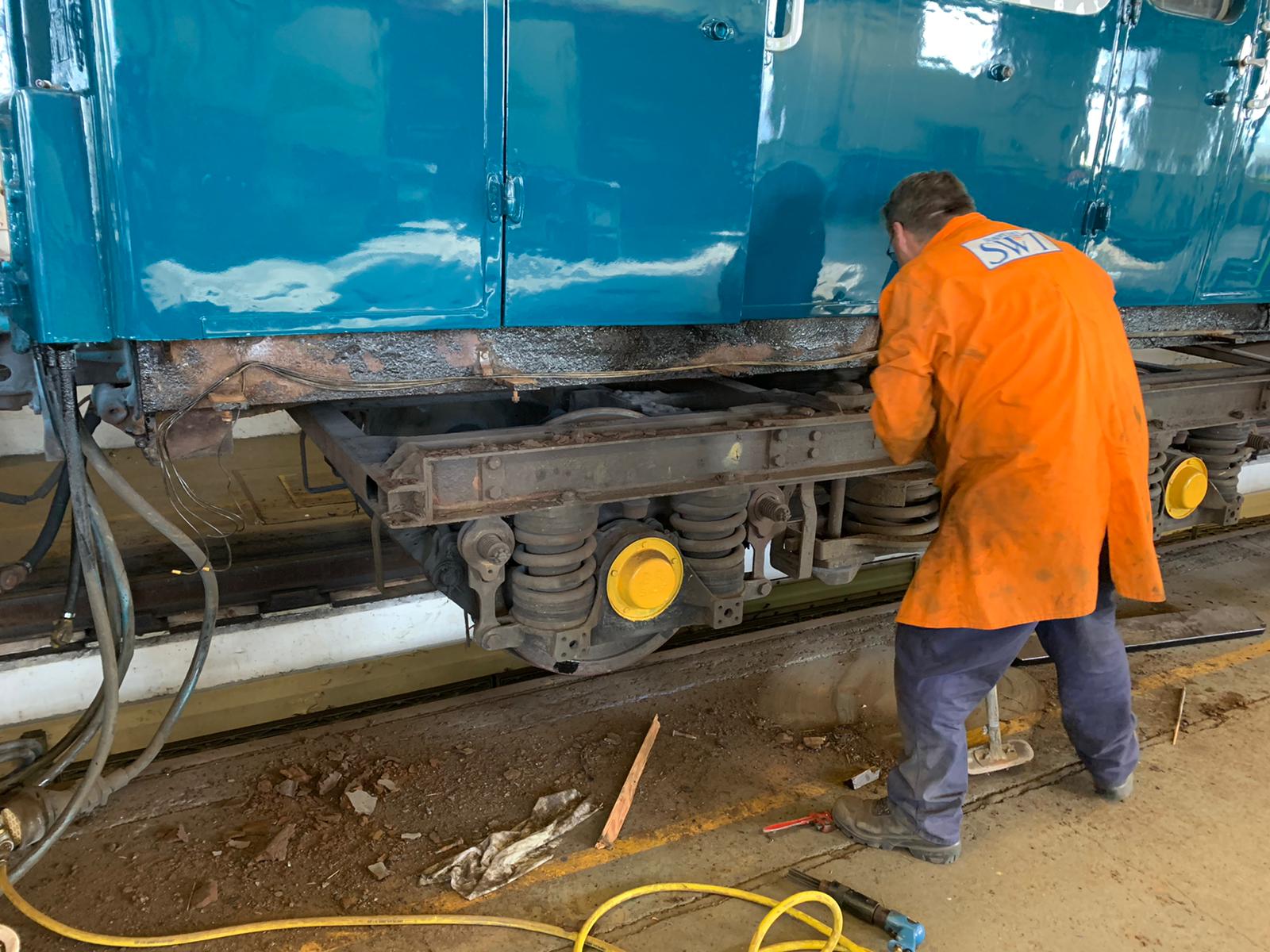 The above photos show the inspection covers removed from the coach body, as well as the wasted state of the conduit. After extensive work with a needle gun (as in the last picture) to clear off a massive accretion of brake dust around the sole bar and step board supports, Buckie removed the rusted conduit. 3 seat bays will need to be stripped back to allow access to the heater boxes during the re-wire. During the process Buckie had to “vigorously unbolt” two step boards to allow access to the conduit (in other words, he had to hit them with a heavy hammer until they gave in) – it’s a nuisance but we have already slated all the step boards for replacement.

So that was that. Buckie observed at the end of a tiring day “we’ve bloody broken it again.” Lynn quite rightly corrected him; “it was already broken, now we know what’s wrong and how to fix it.” This is how it is – we work through the unit, we fix the things we can see, we find stuff we didn’t know about and fix that as well, and then we move on. And as we work, so the unit slowly eases towards that magic day when we can once again move it off the shed and put back to doing what it was built to do; carry the paying public from A to B.

Well, it’s 23:30 and I have to be at work on the Big Railway in 12 hours time. But before I go, let me leave you with that picture taken by Minion Darren yesterday afternoon; slowly but surely 3417 is edging towards the Big Day – this picture just hints at what is to come…. 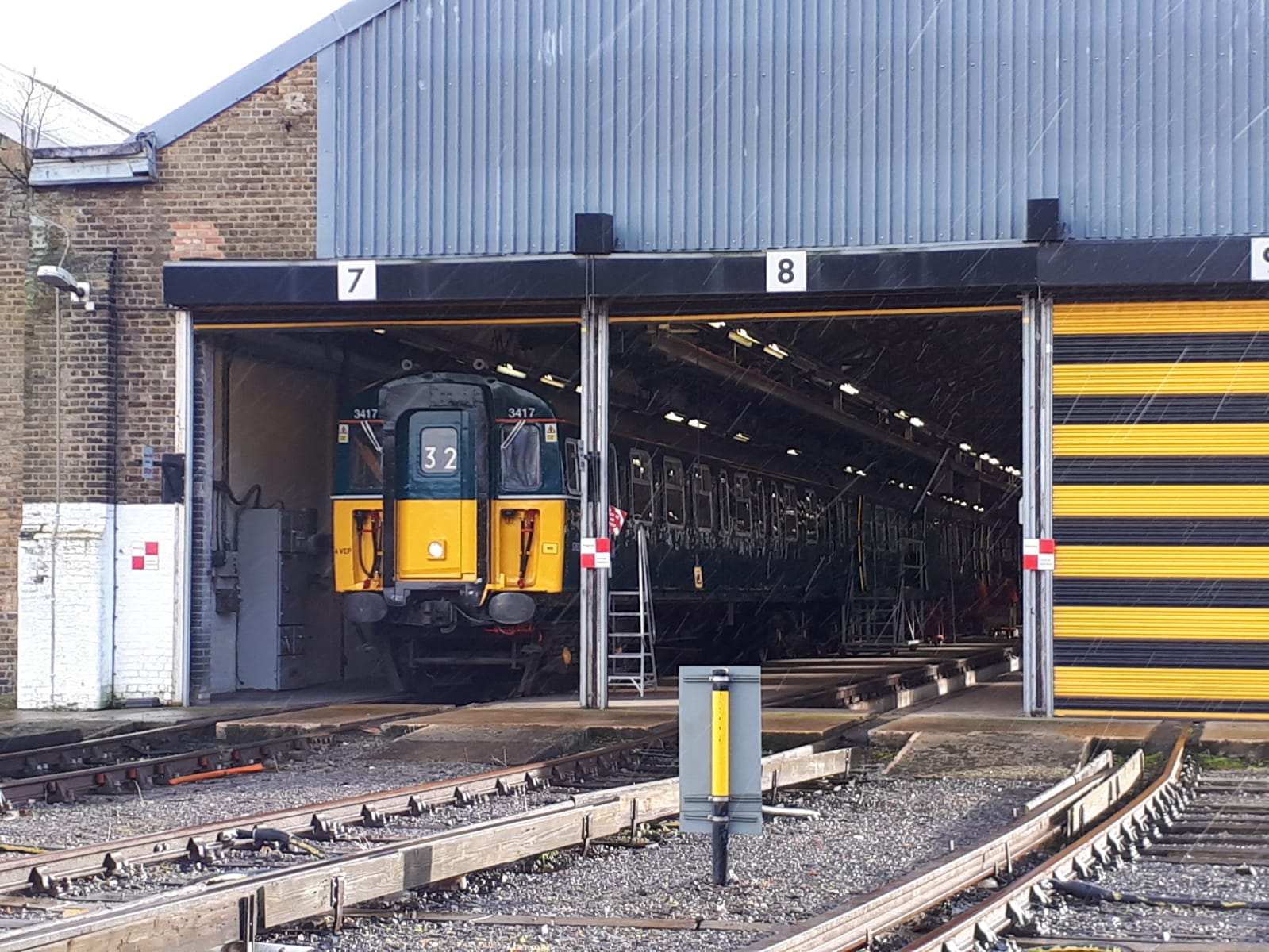