Normally writing would involve a keyboard, but alas I find myself keyboardless. So pen and paper will do. And they have the added benefit that they don’t need a charger. It does mean that at some point in the future I’ll have to translate my own handwriting – your thoughts and prayers will be appreciated. Normal service for the SETG News page would involve my writing something daft/amusing regarding our progress on 3417. But today is different.

Because today 3417 is lacking one of it’s most Senior Minions.

Driver Gwilym Jones, depot driver at Wimbledon Park, ex Euston West Coast driver and part of the original ‘Three Musketeers’ who decided one evening more than a decade ago that 4VEP No. 3417 could not be allowed to slip quietly away, died on Easter Monday. He was just 53 years old.

Gwil was a loving father and a good, honest friend. Most of all he was a dyed-in-the-wool railwayman. His knowledge and passion, fostered from his days as a BR secondman & driver, was formidable. To the embryonic SETG Gwil brought common sense and experience from his long-standing volunteer involvement with the Diesel Traction Group. It was Gwil who grounded my mad dreams, Gwil who suggested “try doing things this way” and it was Gwil who gave us perhaps our most important piece of advice; “learn to walk before you try to run.”

I find myself wondering how to continue. Do I tell you how Gwil was always the first to muck in? Do I tell you instead of his undoubted skill at the controls of a train, wryly observing to me after a particularly brilliant piece of driving “You can’t teach experience”? Do I tell you the story of how he managed to use the after-effects of a heavy night on the ale in Swanage to fumigate a First Class compartment and almost suffocate the railway photographer & writer Paul Bigland?! How do I sum up one man’s contribution? How do I explain to you how important Gwil was to 3417, and to the SETG? Perhaps here and now isn’t the time for such recollections. His loss is too near, the memories too raw. All of us feel his absence. Strawberry Hill will feel oddly empty when we next attend. I hope it’s enough to say that the SETG owes Gwil a great debt, one that we will all work to honour in the future.

In our early days Gwil’s grounding influence guided us, and as things developed and Gwil moved on to other projects, his sage advice held. He last visited the unit in my company only three weeks before he died, and the ravages of the illness that was ultimately to claim his life were clear to see. Despite the frailties of his body, though, his mind remained sharp. We drank tea, as we always did. We talked about the chances of getting corporate support to complete the brake exam needed to allow the unit to grace mainline metals again. I waxed lyrical about a grand and slightly hare-brained scheme to get the unit available for traffic and allow it to attend an upcoming open day, involving clandestine stock moves and steam locomotives and live coverage… It makes me smile now to recall how he listened, thought, took a small draught of tea before saying slowly in his thick Merseyside accent “I don’t think you’ll manage that, Steve.”

Even at the last, Gwil was anchoring my lofty ambitions to reality.

And then, less than a month later, he was gone. The SETG will be the poorer without him. His loss will be keenly felt at Wimbledon Park, by his colleagues and friends there and across the South Western Division. His loss will be felt further afield by his old friends at Euston, his friends on the Western Region, the Diesel Traction Group will miss his undoubted love for their flagship locomotive D1015 “Western Champion”, but most of all his Mum and his young son Morgan will be bereft at his passing.

As for my feelings… Gwil and I laughed and worked and drank and argued and travelled together. I spoke of him often. I will continue to. I look back now and regret all those missed chances for a drink, or a phone call. All I can do now is work to honour our friendship. As 3417 comes back to the public, Gwil will be there in spirit. When I sit in the driver’s seat, or sweep the floor, or fit a seat, or write a blog entry or paint a cab, I will remember my friend. 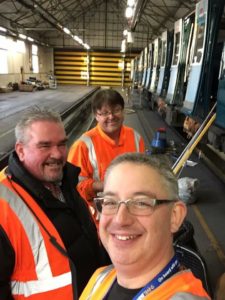 I found myself in my favourite pub in Surbiton, The Lamb, yesterday evening. I was surrounded by concerned friends who had heard that one of my dearest friends had died. In this age of social media and instant contact, they could appreciate for themselves how deeply he was loved, and how much he would be missed. So I sat in a quiet corner with a pad of paper and a pen, both loaned to me by my friend Liz the Landlady, and wrote. I wrote hoping to make sense of the loss, to make sense of the enormous vacuum in my head and my heart. It hasn’t worked its magic quite yet. Time heals, but the absence will remain. I miss my friend.

Paul Bigland wrote a beautiful tribute to Gwil on his blog. You can find it here. Thanks Paul. Gwil would have smiled.