A few quick updates for you rolled into one, because I have been rather lax in updating the news. I apologise – please blame the deliciousness of biscuits, the Big Railway, finding free bricks (it’s a long story – don’t ask) and many other varieties of mundane stuff which get in the way of Playing Trains and telling you lot about it. For those of you who follow the exploits of 3417 on Twitter these little nuggets may come as old news, but I know there are many who don’t. So enough excuses; we have things to share.

Firstly, the long-standing AWS fault in both cabs has finally been remedied. Thanks are due in huge part to our friends at the Southern Preservation Group at Tunbridge Wells West who gave Senior Spanner Minion Buckie a hint as to the possible cause of the fault. The AWS bell contacts needed a good clean and bingo! We have working AWS again. It’s become a favourite of mine to waste 5 minutes opening up the cab in 76262, just for the enjoyment of hearing the AWS system run through the self-test. It reminds me of days long since passed at Wimbledon Park, getting ready to move the Old Girl around the yard. For those of you who haven’t has the pleasure of helping to carry out a test on the AWS equipment of a live 400-series EMU, please find below a video involving a driver, a slightly daft fitter being Daft, a few bells and a few horns:

One of the satisfying parts of this whole process is being able to finally look at a job and say “right – that’s done.” Thanks to Mark Bott and chums at Tunbridge Wells West for the advice and well done to Buckie and Trousers for being able to finally close a long-standing and bloody annoying fault!

In other news the cab of No.76262 is now fully undercoated and ready for a fresh coat of (drumroll please) “BS381c275 ‘Opaline Green'” – another job almost boxed up and done. It’ll be a treat to see the cab finally spick & span. There are other small details to attend to, one of which will be fitting newly-made engraved signs in the cab such as the “Test Your Brake” made to replace the original that some delightful thieving bugger removed at some point in the past. Additionally we will be fitting new engraved plates to the control desk so that drivers who are unfamiliar with the control layout (we’re thinking of crews on preserved lines, here) will know what switches to flick and which ones to leave alone! 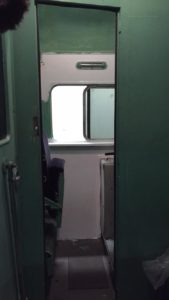 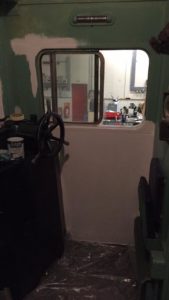 As well as the painting in the cab, we have turned our attention to rubbing down the inner cab doors. They will carry the same Opaline Green as the rest of the cab, although in the interests of winding up Buckie, Trousers and I decided to paint up one in an experimental colour scheme. We then sent the picture to Buckie, in the hopes that we would cause him to spit out a mouthful of tea in outrage. To our great disappointment there was no explosion of traditionalist railway indignation; his only comment was “my daughter would love it – lets paint the whole unit like that.” Bugger. So that’s a bit of extra work to do stripping it back down again. Still, we had a laugh. 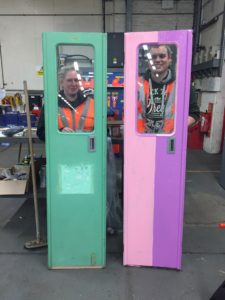 (Potter: Note to self – when carrying out a wind-up, remember that senior railwaymen have been senior for a lot longer than you… And that they’ve probably been wound-up in the past and know how to react. Bugger)

The biggest cause of excitement, though, has been the work to reinstall the lighting to the second class saloon on 76262. I can’t begin to describe the difference it makes to be able to work in full light; and how good the saloon looks. Buckie and Minion Julie deserve a pat of the back and extra biscuits for their efforts! As ever, our thanks go to TBM Rail of Crewe for their generous support in refurbishing the lighting panels. 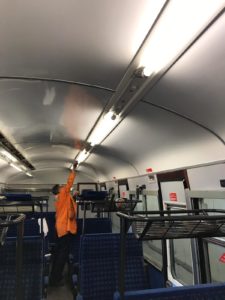 Finally, news from Other Than The Shed: Minion Darren, a man with some serious carpentry skills, has been busy in his garage making up the first replacement window trims for the passengers saloons. Using one of the ‘good’ frames as a template, he is preparing 14 new ones to be fitted to the unit over the next few months. As with all things, this depends on how much time he has to devote to the project but it’s a start and we are very much looking forward to seeing them installed. 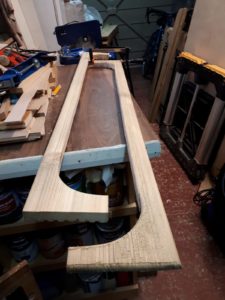 So there we are – three work days reported in one go. Who could ask for more, eh? Well, us actually. We have been asking, and thanks to some influential chums we might be getting another leg-up from the Big Railway. We can’t divulge details just yet but if we can get everything to line up properly then there could be another huge box ticked in the effort to get 3417 out of the shed and returned to traffic. Stay tuned, folks!

And before we go lets have another picture of ‘The Door That Will Never Be Fitted In That Bloody Colour And If It Isn’t Stripped By The Time I Get To The Shed I’ll Clout The Pair Of You With A Paddle’, shall we? 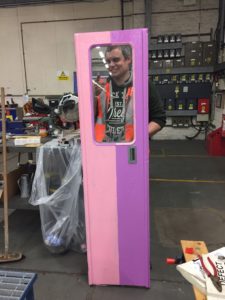